At the beginning of this journey, I heard a lot of different things about a bunch of different stadiums. Baseball fans love asking me questions about stadiums they’ve wanted to visit or tell me things about the ones they have. What they really love though is talking about their favorite and least favorite ballparks that they have been to with me. Typically, when this conversation start, there are certain stadiums everyone loves discussing: Wrigley, Fenway and AT&T Park to name a few. While people typically have great things to say about those parks, quite the opposite holds true for the Oakland Athletics home—the Oakland Coliseum. In fact, when I started this project, I was told that Oakland’s ballpark is a relic just waiting to be knocked down. So upon my arrival there, expectations were at an all-time low. But, I was about to have my mind blown.

As one of the oldest parks in the MLB, this stadium is exactly what I had been warned about, old and dated. Because of my travel plans both before and after the game, it was most practical for me to drive to the stadium and park in the lot. I arrived there and paid, I believe, $20 to park. I noticed that there were some spaces reserved in the front row, so I explained my project to the attendant and asked if I could move my car up there to act as a billboard. Enthused about my project and eager to help, we found me a great space which exposed my car to lots of foot traffic and free advertising.

Although the parking lots and the stadium were both fairly empty, the energy in them was amazing. I specifically chose this game because I wanted the free Barry Zito/Miguel Tejada bobble-head, so I made sure to arrive early and ensure I got one. I was surprised upon my arrival with the amount of tailgating that was going on in the parking lots, but it was a pleasant surprise. It was my first reminder on this trip that a team doesn’t need to be winning, or even competing, for its fans to be passionate about it. Directly across from where I parked, was a Chevy stand giving away free shirts for filling out a survey. Since I love free stuff, I gladly pounced on this opportunity.

Even though the walk to the gate was a trek, I made some friends along the way and spent some time with them before the game. The passion these two ladies had for their A’s was infectious. We spent 45 minutes or so together walking around the stadium before heading to the box office, and sharing baseball stories. I got a lot of shit from them for wearing a St. Louis Cardinals shirt, but hey, I got a lot of shit from everyone in the place for that. Since I had already bought my ticket on Stubhub, we walked into the stadium together before going our separate ways and meeting later in the game. But before we departed, they made sure to introduce me to same “famous” vendors at the park and they took me to an office to get my welcome pin and certificate to commemorate my first visit to the Coliseum. I already felt more welcomed at this ballpark than any I had thus far visited!

After being welcomed by fan services and departing my new friends, I did my walk-through of the park. Everyone knows how much I love baseball history, and there was a decent amount of it there, but overall, the park was boring and bland. Most importantly for me, the merchandise was horrible. I literally searched far and wide throughout the entire place and there was nothing I wanted. Luckily, I had gotten my free shirt and bobble-head though and later in the trip I got the most sickening vintage Jose Canseco t-shirt at a thrift store in Los Angeles. As I continued around the park, everyone had something to say about my Cardinals shirt or money to offer me for my bobble-head. With nothing to buy, and an aching belly, I went searching for food.

It so happened, that on this day, there were a ton of food trucks in the “Ballpark at the Coliseum” so I got some nasty Korean BBQ, mostly because that truck had the shortest line. I ended up spending $20 on the crap, but hey, at least I supported a local small business? The “Ballpark at the Coliseum” felt like a huge frat party. Everyone was having such a great time and the energy was amazing. I made more friends everywhere I went, including one who told me how I was living his dream. We talked for a bit before I headed to my seat.

I spent $51 for a first row spot directly behind the visiting bullpen, and the seat was amazing. However, in hindsight, I could have bought the cheapest ticket in the park and sat anywhere. The stadium was half empty and half of the sections were closed off. I loved my view, and I wanted to stay there the entire game. However, I needed to see some of the other views as well. I was upset because the stadium was entirely non-smoking, but when I went to the top of the park it was full of smoke. Literally, it felt like I was at a Phish show because there was so much weed smoke. Shockingly though, the view was still pretty sweet.

The rest of the stadium was pretty crappy, but again, its energy was amazing. The bathrooms were kind of gross, but later in the trip I saw much worse, and at least there were no lines. In addition to my Korean food, I got a snow-cone and a double espresso for $5 and $4 respectively. I also spent $20 of the 50/50 raffle, and I literally missed it by one digit! The food selections, other than the food trucks were the same crappy run-of-the-mill stuff you’ll find at any ballpark or state fair. Literally, nothing was special about this place besides the fans and their energy they brought with them. However, that energy is what made this park one of my favorite and best experiences this summer!

PS-the bathrooms are what you might expect at such an old stadium, however, they were clean enough–probably because the place was so empty 😂

Is this not the cutest, most nostalgic ticket office ever? 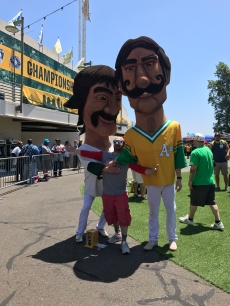 I didnt get to meet Rickey, but I met the real one when I was younger at a baseball card show! 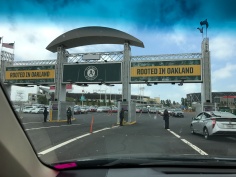 Pulling into the stadium

I guess this scorecard vendor is kinda famous, but I don’t remember his name! He’s been there for like 15+ years

Shirts are always better when they are free!

Posing with some of my free stuff, including my welcome certificate!

Hey Ballboy, how you doing?

View from up high

OMG, this guy was the most obnoxious fan I sat by all summer! 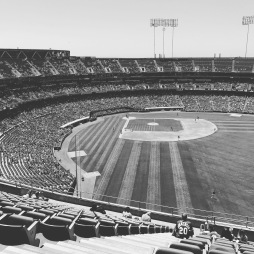 Because the park is so ancient, I like this B&W shot

Mickey sure is at a lot of different ballparks

It was like a frat party out here, so much celebration and fun!

Another view from up high.

She made me some coffee

The halls were empty!

Some of my favorite people from the trip, these dudes are as hardcore of fans as any I’ve met at any ballpark. They sure did welcome this guy in, thanks guys! 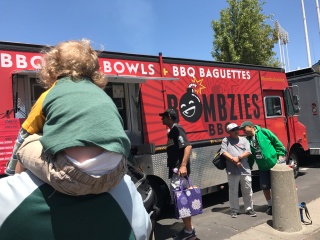 The food truck that I dined at