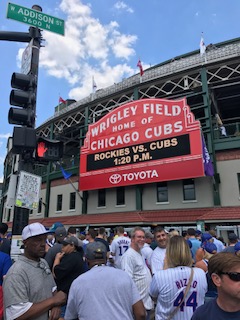 The first stop of my epic summer research project was the iconic Wrigley Field, home of the world champion Chicago Cubs. Wrigley is one of my favorite places in the world, which is why I chose to go there first. Because I grew up in Chicago, I have countless memories here. I watched some of the greatest Cubs ever play ball there, including: Hall of Famers Andre Dawson, Greg Maddux and Ryne Sandberg. I also was living in Chicago during Sammy Sosa’s magical summers when he chased and surpassed Roger Maris’ single-season home run record.  Each summer of my life, I have been to at least a couple of Cubs games. In the past, I have even coordinated my travel plans to visit family based on the Cubbies home schedule. I have witnessed some good times, and even more bad ones for my home town team over the years. Prior to this visit, my last game at Wrigley was when the Cubs won game 5 of the World Series before going on to win the championship. So naturally, my most recent memory at Wrigley was nothing less than electric.

Wrigley Field is located in the heart of Chicago’s North Side. The stadium is bordered by businesses and apartments. Many of these buildings feature rooftops on which fans can also watch the game. Parking in the neighborhood is always a challenge, regardless of if there is a game. During games, parking is insanely expensive. Because of this and the fact that my parents live right near the Purple Line “L” train, I chose to take the train to the stadium. From the moment I boarded the train, it was full of Cubs fans, all decked out in their team gear. I always feel bad for people on their regular commutes, because a train full of Cubs fans can be an intense experience. My roundtrip train ticket cost a total of $6, which coupled with the ease of the commute made my trip to and from the stadium both convenient and cost efficient. When you exit the train, you are literally a hop, skip or jump from the stadium.

The neighborhood vibe of Wrigleyville always offers a warm welcome to baseball fans, but on game day, it can be a bit overwhelming. Street vendors walk around selling Cubs gear that is no doubt inauthentic, while there are also a number of larger vendors and sports stores selling more expensive and authentic memorabilia. I did purchase a t-shirt from a vendor for my dad for $25 which was half the cost of my authentic, team store tank top. Long before the umpire says “play ball,” Cubs fans often start drinking at one of the local pubs like Murphy’s Bleachers. Ticket scalpers flood the streets trying to buy and sell tickets. Since I did not feel like taking a chance on this for my first game, so I bought a ticket that seemed like a great deal via StubHub. Despite my ticket having a face value of $64, I got it for just under $60—including all the fees.

I was seated in the infield terrace, section 231 in row 12.  Because I was wandering the park and checking out the new amenities, I did not get to my seat until the top of the second inning. From the moment I sat down, I realized why my ticket was such a bargain. A huge pole restricted my view of 1st base, which of course was not mentioned on the ticket or on StubHub. I did contact StubHub after the event to complain, and they were apologetic despite saying that it was no fault of their own. However, they did give me a 20% credit (about $12) for my next purchase. I sat in my seat until the bottom of the fourth inning, frustrated by my obstructed view. I then decided to go check out the upper deck “nosebleed” seats and went to the very top of the stadium, where I had never been before. I was pleasantly surprised that the view here was pretty stellar. In fact, it was far superior to my more premium seat. My final seat was about 25 rows back on the first base line, closer to home plate. I actually sat near the same spot during the World Series, and the view is pretty awesome. While I was closer to the action now, I could not see the entire field like I could up top, which I found interesting since this seat’s price is more than triple of the upper deck seat. In between moving from seat to seat, I wandered out to “The Park at Wrigley.”

This new addition to the stadium is one of many costly renovations that has debuted this season. I found it less than spectacular. I was really bothered when I spent $5.75 on a bottle of water that I was not allowed to bring back in the stadium after I went into the new “Park at Wrigley.” This troubled me because you need a ticket to be in the park, so you are essentially not leaving, but you still cannot bring back in a very costly bottle of water. Overall, these new additions to the park left me very disappointed. I felt like they detracted from the overall game day experience and made fans less engaged. I do not understand how people can be content watching the game from a big screen in the new “Park at Wrigley” rather than from their seats in the stadium. Further, as a smoker, I was bothered by the tiny section catering to people like me. In the old days, you could smoke on the ramps at Wrigley, now there are two dedicated smoking areas across the stadium and both combine to be smaller than my bachelor pad apartment in Philly. In addition, you have to go through security to get to and from these areas, which is also frustrating, since again—you are not leaving the stadium. Upon re-entering the stadium, I needed to pee, so I went into the bathroom. Previously, my biggest complaint about Wrigley was the troth style bathrooms. I was pleasantly surprised that they had been slightly updated and now include actual urinals as well as more stalls. I used two bathrooms throughout the game, and both had been greatly improved since last season. Following my smoke and bathroom breaks, I decided it was time to shop.

The new team store was nice but grossly overpriced. I paid $49, including tax, for a Nike Cubs tank top which I thought was insane but I liked it. The merchandise in the store was nothing special really. There were some neat championship hats, but everything else I feel like I have seen before. The store had some neat artifacts including Silver Slugger and Gold Glove awards won by many Cubs over the years. Although these were cool, a Hall of Fame would be much cooler. There is a bunch of autographed memorabilia and game used items in the store for sale at grossly inflated prices. Kris Bryant is an MVP and should have a great career ahead of him, but for the same price they charge for his autograph, I can buy an authentic Joe DiMaggio or Mickey Mantle autograph from a memorabilia dealer. Although the store was nice, the staff was annoying. One lady yelled at me for trying on the t-shirt I bought shortly after another guy told me I could. She also yelled at me for entering over a barricade which I did not do. She pissed me off…Next to the store was a jewelry store which had some really awesome stuff. I got to take my picture with the World Series trophy in there, and got to view the championship rings.

I came to the ballpark on an empty stomach, but none of the food appealed to me. Over my lifetime, I have tried just about every food the park has to offer. Considering the prices and quality of the food, I ended up getting nothing to eat. I was intrigued by a food cart in the park that was offering a $20 lobster roll, but when I returned around the 5th inning, the cart had already left. The food stands have been slightly made over since last season. They now feature television screens with pricing and photos. There was a $17 filet mignon sandwich that I considered, but my only purchase ended up being the bottle of water I had to throw out. Since I do not drink beer, my observations on it are not too in-depth. However, I did notice the price is lower this season then it was during the World Series.

I left this game disappointed, not just because my Cubs lost, but because my overall fan experience was less than stellar. They call Wrigley “the friendly confines,” but I found it to be quite the opposite. The employees were mostly rude and I feel like the renovations to the stadium detract from the overall game experience. The customer service I received sucked, as the employees were rude and lines were insane. Even if I had wanted to eat something, I would have spent an inning waiting for it. The crowd was also less welcoming than in the past, probably because so many people are tourists visiting the historic stadium of the World Champions. Wrigley was more fun when the Cubs were loveable losers.

Because I am still a Cubs fan and I still love Wrigley, of course I will return. In addition, I would have no problem recommending this park to people. Despite its shortcomings, Wrigley has so much history, and is so cool. The ivy walls are only rivaled by Fenway’s “Green Monster” as the most iconic stadium features in Major League Baseball. Any baseball fan should enjoy Wrigley for its nostalgia alone. Since this was the first stop on my travels, it is my only point of reference thus far and cannot be compared to any other park. However, I stopped at Busch Stadium yesterday to see the Cardinals play the Phillies, and my experience there was stellar. Read about it in my next post!

Is there something here missing that you want to read about? Please let me know, and I will try to include it in my upcoming posts about other parks! Thanks-AS 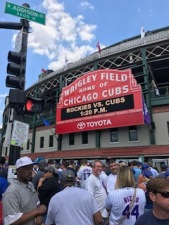 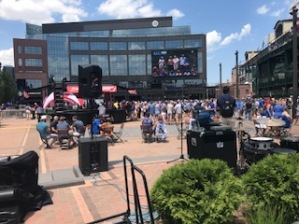 More of “The Park at Wrigley” 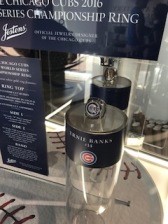 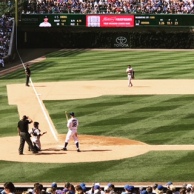 “The Park at Wrigley” 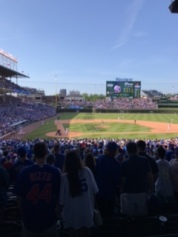 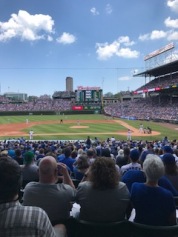 Just a picture, not sure of the details 🙂

Walking around, behind home plate 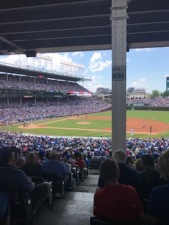 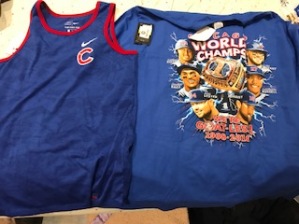 Shirts I bought, $49 for the Nike tank and $25 for the other one, bought from a street vendor 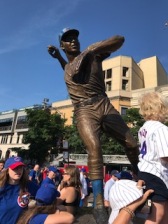 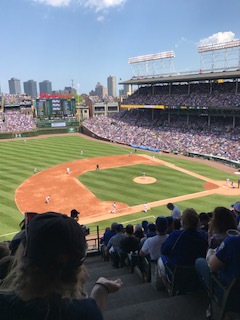 View from the “Nose-Bleeds” 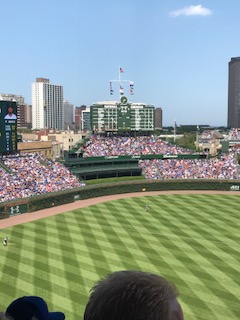 Another view from up top, with the awesome old scorboard

Panoramic view from up high 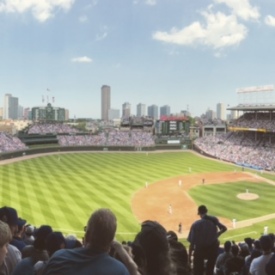 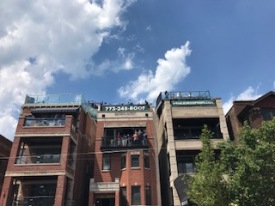 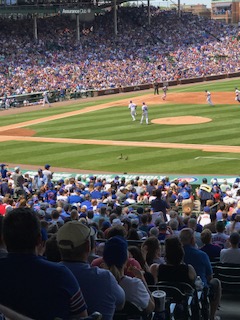 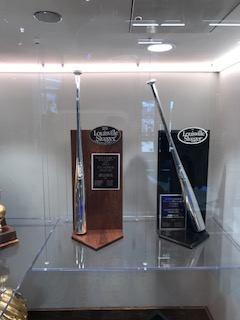 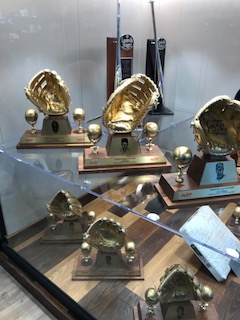